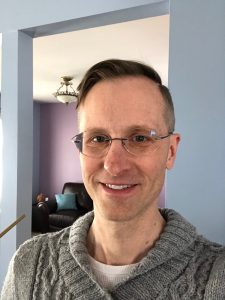 Born in the winter water wonderland of Michigan, I was pastured on Christian teaching from the time I was a pup. My father managed a Christian radio station. He sometimes did “pulpit fill” (delivered sermons) for many area churches. That provided me quite an education into Protestantism.  My mother, meanwhile, was an artist and a homemaker.

At age 15 I began working at the Christian radio station. By 18 I was teaching mostly elderly adults at Wednesday noon prayer meetings at our church. During college, I was active in InterVarsity Christian Fellowship.

I fell away in my early twenties and stayed clear of the faith for over 20 years. During that time I explored all sorts of religions and non-religions. My journey into the hinterlands terminated in a deep agnosticism bordering on atheism.

In 2016, the Lord put me on the homestretch towards repentance. Read my testimony (part II then part I – yes, they are out of order!) for more details.

I began this website after realizing I could no longer inundate my Facebook friends (95%+ unbelievers) with article-length posts. I feared they were beginning to associate the Word of God with eye rolling / yawning at my treatises. Many of the initial articles on this site are, in fact, old Facebook posts.

I was named after John the Baptist (although I prefer “John the Immerser”). No, I don’t believe myself to be his resurrected spirit. I just happen to live on the edge of the wilderness in the Upper Peninsula of Michigan. Plus, I was raised in the holiness movement (Wesleyan and Nazarene) with a heavy-helping of fire-and-brimstone sermons.

In my studies over the years, I’ve taken on an eclectic blend of traditions: Evangelical, Orthodox, Anabaptist, and pre-Nicene catholicism.

Bonus tip: if ever you think you’ve arrived in the faith, I encourage you to read through the testimonies of the martyrs beginning with Polycarp,  going through the Waldenses, Moravians and Anabaptists up to modern times (Soviets, Chinese, etc). You will quickly exclaim, “God have mercy upon me, a sinner!” (Luke 18:13)

Welcome! And may God make Himself known to and through you!